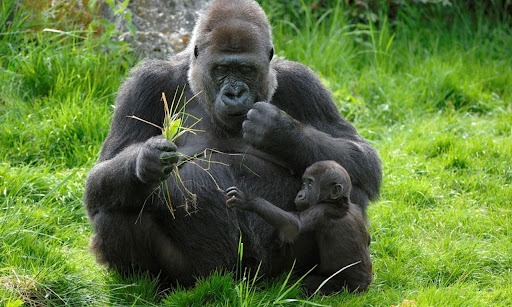 The Virunga Park of the Democratic Republic of Congo welcomed the birth of a lowland gorilla, an endangered species. As per the officials, the birth of this gorilla has boosted the population to seven. The birth was discovered by the rangers who were patrolling the site and they are working hard to safeguard the vulnerable status of gorillas.

The gorilla population in the park has witnessed a decline of 5% and plunged from 17000 to 6000. This fall can be attributed to the illegal hunting for their bushmeat. A close cousin of the lowland species, mountain species observed the birth of seventeen gorillas last year.

Virunga Park is located on the border of DRC with Uganda and Rwanda and covers an approximate area of 3000 sq. m. It was inaugurated in 1925 and is considered one of the oldest reserves on the continent. It is also the sanctuary for critically endangered and rare mountain gorillas.