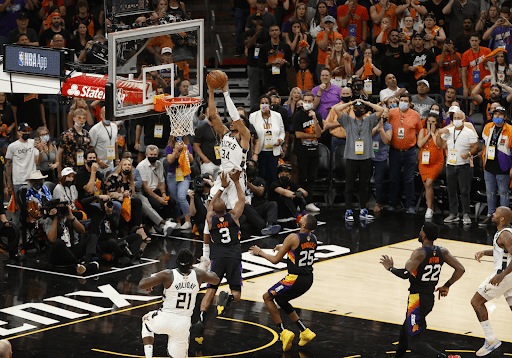 The Milwaukee Bucks have come within one win from their second NBA (www.NBA.com) Championship, defeating the Phoenix Suns 123-119 in Game 5 and taking a 3-2 lead in the NBA Finals. They will have an upper hand when the series shifts back to Milwaukee for Game 6 on Tuesday night, a must-win on the road for the Suns.

The Bucks were led by Giannis Antetokounmpo who recorded 32 points and nine rebounds, with some big plays down the stretch from Khris Middleton (29 points and seven rebounds) and Jrue Holiday (27 points, 13 assists and three steals).

Devin Booker had a spectacular night for the Suns, scoring 40 points, but was stripped off the ball by Jrue Holiday in the Bucks’ pivotal defensive play late in the fourth quarter. Chris Paul had 21 points and 11 assists, and Deandre Ayton added 20 points and 10 rebounds.

Please find the postgame transcripts attached and select quotes below.

GIANNIS ANTETOKOUNMPO (BUCKS): “I feel like we don’t stop. I feel like — I’ve been a part of different teams. Usually when you’re down 15 or 16 or whatever, down 0-2 or whatever the case might be, you kind of like, stop. You kind of like — you kind of stop competing in a way. But I feel like this team, we don’t do that. We haven’t done that all year long, I think. I can’t remember, I can’t go that far back, but we keep competing.”

“I can’t get too carried away. I have to stay in the present. I can’t worry about the outcome. Obviously we know what the deal is. It’s one game away from being an NBA champ, being in the history of this game, being always there. You know, nobody can take that away from you. Doing it in front of our families and our fans, it’s big. It’s going to be big. That can wait. We’ve got to focus and keep playing good basketball. We’ve got to go back home and we’ve got to recover. I’ve got to grab some burgers, eat something right now, because I’m hungry. And then we’ve got to watch the clips and see what we did well, what we didn’t do well and what we can do better. There’s steps to it before the game.”

PAT CONNAUGHTON (BUCKS): “We don’t really care if it’s Bucks in whatever; we just want it to be Bucks, right. I think it’s been great to rally the fan base. I think they have actually had it for a few years, so it’s been a cool thing to hear and see. But at the end of the day, we go out there every single night trying to win, trying to represent the city of Milwaukee to the best of our ability. We’ve got to do it again. The job’s not done. It was a great win tonight. We had each other’s backs and there was ebbs and flows to the game that I think really brought us together and showed us that we can fight through adversity. But we’ve still got one more.”

CHRIS PAUL (SUNS): “It’s a 48-minute game. I’ll go back and look at it and see, but we got to play the way we started off the game, we got to put a full game together like that, especially going there. We got to win a game in Milwaukee, so that’s all that matters right now.”

MIKAL BRIDGES (SUNS): “We’re ready, man, we’re ready for next game. If you sulk about it, it’s, the blink of an eye the season is going to be over. So, we’ll learn from it. The coach is going to show clips and what we have to do better, but we know what we have to do. But we’re ready, man, just do or die. We lost it’s over. So, we got to go out there and play our way and go get Game 6.”