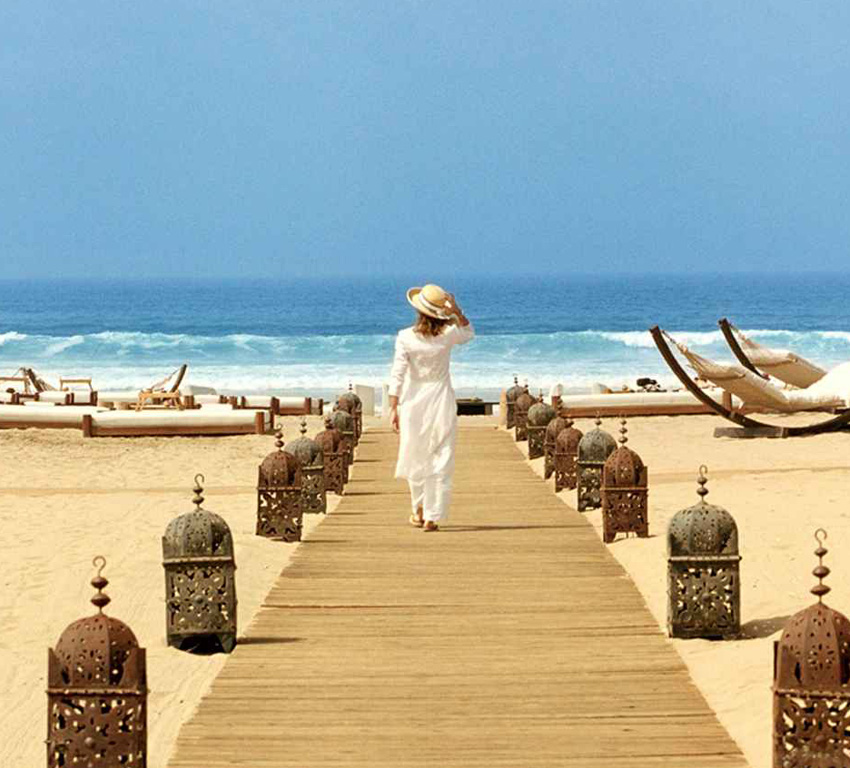 About a thousand years ago, on either side of the mighty Atlas Mountains lived small independent clans of farmers, traders and nomads. The nomads or ‘Berbers’ as they were known as, understood the landscape so well that they were able to leverage the maximum out of the available resources. For instance, they had the knowhow to find and move the scarce resource of water under the arid Sahara desert through “katara” – a part of the ancient irrigation system made up of a complex network of underground tunnels for funnelling water. Such was their experience and mastery that they created an empire from scratch, which came to be known as the Berber Kingdom of Morocco.

Morocco, at that time, traded in clothes, books, horses and the lucrative gold among other things. The rulers of the Kingdom bolstered tremendous wealth and keenly promoted their culture, thus, changing this part of Africa forever. A historically prominent regional power, Morocco has a history of independence not shared by its neighbours as it remained the only North African country to avoid the Ottoman occupation.

Located in the Maghreb (west) region of the African continent, the 21st century Morocco is a sovereign nation with a constitutional monarchy. Under this political arrangement, the King of Morocco is vested with vast executive and legislative powers, primarily over the military, foreign policy and religious affairs. The current emperor, King Mohammed VI, known for building the Royal Mansour, the world’s first handmade hotel that showcases Morocco’s craftsmanship, was enthroned in Rabat, the country’s capital on July 30, 1999.

An Arabic name for Morocco, al- Maghrib al-Aqsa, means “the extreme west” and attests to Morocco’s place as the westernmost country in the Arab world. Lying at the crossroads of Europe, Africa and Arabia, Morocco has a cultural heritage that is a hybrid of Berber, Jewish and Arab along with sprinkles of external influences of the French and the Spanish. It is an oasis of diverse culture and influences. Though Arabic is the official language of the country, nearly half of the population still speaks Berber, the language of the nomadic inhabitants, while French and Spanish are other languages spoken in Morocco.

Lying at the crossroads of Europe, Africa and Arabia, Morocco has a cultural heritage that is a hybrid of Berber, Jewish and Arab along with sprinkles of external influences of the French and the Spanish. It is an oasis of diverse culture and influences.

The geography of this nation is as multifarious as its culture. The ruggedness of the dunes of the Sahara is replaced by the calmness of the Atlantic Ocean shoreline in a matter of just a few miles. The 13, 664.7 feet high Atlas Mountains serve as the natural divide between the deserts and the more fertile and populous lands. And for adventuresports lover, Oukaiimeden, the highest ski resort in Africa is the place to be. Morocco is the only African country and one among the three countries in the world with both Mediterranean and Atlantic coastlines. From Morocco, an 8 mile walk across the Strait of Gibraltar will take you straight to Europe!

Some call it the Pink city while for some, Marrakech represents the feisty shade of Red. The city is divided into two distinct areas, the old city (medina) that houses the souks and the modern city (Gueliz) with residential areas known as l’Hivernage. The souks (markets) of this city are a feast for all your senses. Your eyes are treated to a blast of colours, while your olfactory organs are welcomed by the enticing fragrance of honey-cakes and spices. As one strides through the crowded souks, one gets a glimpse of the lifestyle of common man. A further walk into the interiors of the city will take you to the traditional courtyard homes of the city known as “riads”. Villa Des Orangers is one such charming century old riad. Adjacent to a mosque in medina, lies a huge plaza known as the Jama Al- Fana that was historically the centre of Marrakech. Water sellers, snake charmers, musicians, dancers and food throng the square, which was once the spot for public executions. The city remains sun-soaked all year long, hence one requires sunprotection such as a headgear – even during the winters.

Amazighs is the predominant ethnic group in the city of Tinghir or Tinerhir, which lies at the center of one of the most attractive oases in southern Morocco.

The largest city of the country houses the one of the largest artificial ports in the world, the Port of Casablanca, which is also the primary naval base of the Royal Moroccan Navy.

Morocco’s second largest city that was founded in the 19th century is home to al-Qarawiyin, established as a madrasa (an Arabic educational institution), and considered to be the oldest university in the world. A day trip from Fes will take you back in time to Volubilis, the preserved Roman ruins in North Africa.

The best way to a man’s heart is through his stomach, similarly the best way to know a country is through its food. When you think of authentic Moroccan cuisine, think cream cheese briouat (pastries) with strawberry puree, chicken tagine with caramelised apples and thyme honey, tart green olives paired with chopped preserved lemon rind, or a meat patty dusted with cinnamon and icing sugar! Morocco is the place of rich pies, calamari and grilled sardines (fish) and cooked vegetable salads scooped up with bread. In fact, Morocco is the largest processor and exporter of sardines in the world. Tea is so popular in the country that it is considered an art form and is served not only at mealtimes but all through the day. So don’t forget to sip on mint tea or “Moroccan whisky” as it is fondly known as. And if you happen to visit the place during the holy month of Ramadan, break your fast at sunset with a steaming bowl of harira soup – rich with tomatoes, lentils, chickpeas and lamb.

Morocco is the place of rich pies, calamari and grilled sardines (fish) and cooked vegetable salads scooped up with bread. In fact, Morocco is the largest processor and exporter of sardines in the world.

However, remember not to handle food with your left hand or you will end up offending the natives. Also it is considered impolite to say no to meat if it is offered as meal. The finest eateries of Morocco include Nomad, Al Fassia, Le Grand Café de la Poste, PepeNero and Le Restaurant at La Maison Arabe to name a few. With King Mohammed VI’s vision to increase the number of tourists visiting Morocco to 18 million by the year 2020, the country’s hotel industry is looking towards the future with an ambitious dream.

The country loves football and it became the first Arab-African country to qualify for the second round of the 13th FIFA world cup in 1986, when “the Lions of the Atlas” – the national football team- roared ahead of Portugal, Poland and England.

The main industries in the fifth largest economy of Africa include phosphate mining, food processing, textile and clothing and manufacturing. The country has two oil refineries with a total refining capacity of 1, 50,000 barrels per day. Morocco has about two-thirds of the world’s phosphate reserves, ahead of the reserves of the world’s largest economies such as China, Russia and the United States. Therefore, Phosphate mining, responsible for half of the nation’s income, is one of the most flourishing industries of the country.

While the phosphates and the textile industries contributed 21% and 16% respectively in exports in the year 2015, it was the automotive sector that emerged as the largest contributor (22%). Morocco has trade agreements with the European Union, the United States of America, Turkey and the Arab nations. Because of its historical ties and closeness with Western Europe, the country is considered as a favourable window for investors from Europe and the US. Hence, it comes as no surprise that Morocco is the leader in Foreign Direct Investment inflows in North Africa.

Morocco is building, what could be the largest solar plant in the world, with a total capacity of 580 MW of electricity. In November 2016, Marrakech hosted the 22nd Conference of Parties (COP 22), where leaders charted pathways for innovation in technology in adaptation to climate change. All these efforts are in line with Morocco’s plans to fulfil half of its energy needs using renewable energy resources by 2030.

Because of its historical ties and closeness with Western Europe, the country is considered as a favourable window for investors from Europe and the US.

Other than the aforementioned sectors, Morocco has a huge scope in the segments of Information and Communication Technology, transports, finance and aeronautics.

Morocco: the Gateway to Africa

The National symbol of Morocco aptly consolidates the fact that Moroccans go out of their way to preserve their honour. The Royal Coat of Arms features two lions supporting a shield that displays a green pentagram or Star of Solomon against a red background before the Atlas Mountains and rising sun, symbolising that the era of development of this nation has just begun. To explore the inside-out of this country would be a journey like no other, for this is the “Gateway” to one of the most exotic continents on Earth. This is Morocco!