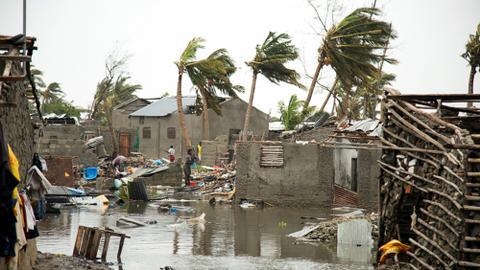 Cyclone Gombe that flooded large areas of central and northern Mozambique is consistently leading to a high death toll in the region. The recent reports of the death toll from Cyclone Gombe have jumped to 48 people, with roads completely damaged, which were the only access to the worst-hit regions in Mozambique.

The rains and strong winds from Cyclone Gombe have caused most houses to collapse in the region, leaving the residents stranded. Cyclone Gombe is reported to have affected thousands of Mozambique residents since it made its landfall last week. It is believed that at least 3000 residential properties have been completely destroyed.

The most affected area by Cyclone Gombe is Mossuril in the northern province of Nampula. The region is reported to have witnessed 31 deaths. Reports claim that the region has been isolated after the phone services were damaged and connecting road caved in due to the cyclone. Authorities and other essential services are being transported to the people of Mozambique through the sea route.

Moreover, the schools, local health centres and crop fields in the region are also destroyed.

A local official authority, Mety Gondola said that the local community leaders continue surveying the region that has been destroyed by the cyclone. They are also assisting local families affected by the cyclone and sending them relief.