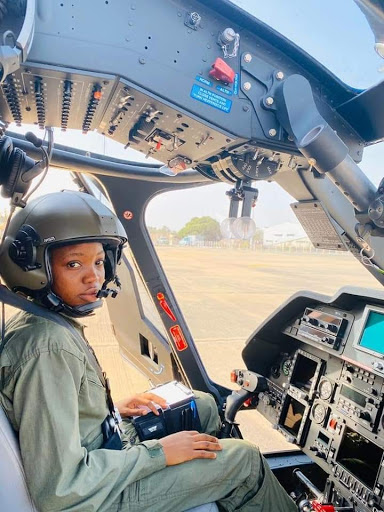 The Nigerian Air Force (NAF), and indeed the entire Nation, was thrown into mourning as a result of the death of one of our shining young stars in the person of Flying Officer Tolulope Arotile, the NAF’s first female combat helicopter pilot. Her unfortunate demise has elicited an overwhelming outpouring of condolences, prayers, and support to the NAF as well as the Arotile Family.

This has no doubt been so, not just for Tolulope’s outstanding accomplishments at the tender age of 24, but also because of her sterling personal qualities of excellence, hard work, dedication to duty, confidence and courage, which endeared her to her superiors, subordinates, and peers in the Service. Unfortunately, because of the peculiar circumstances of the incident that led to her death, a rash of falsehoods, innuendos, conspiracy theories and the likes have been propagated in the public space, especially on Social Media.

The NAF sincerely hopes that the findings of the just-concluded preliminary investigation into this unfortunate and painful incident will address the misinformed issues raised in the Social Media on the tragedy. Moreover, while it would have been ideal for the entire investigation to be concluded before details on the incident are released, the NAF, insensitivity to public concerns occasioned by the spread of false information, appreciates the imperative to provide more clarity at this very difficult moment.

In line with the normal procedure in the Nigerian Air Force during such occurrences, an investigation was immediately instituted to formally determine the circumstances of the incident. Accordingly, the preliminary investigation has revealed the following details:

Having carefully considered the foregoing, the preliminary investigation concluded that:

The Nigerian Air Force, being a highly professional and disciplined organization, will not join issues with any individuals or groups regarding the spurious allegations of ‘foul play’ espoused in some quarters. Suffice it to say that Flying Officer Arotile was a pride of the NAF in whom the Service had invested massively in terms of resources, time, and energy. Consequently, it is ludicrous for anyone to even remotely insinuate malevolent intent on the part of the Service against one of its most prized assets.

Furthermore, it is extremely sad and disheartening that, rather than allow the Arotile Family and the Nigerian Air Force to grieve for our dearly departed Tolulope in peace, many have chosen to politicize her death, while others are using the incident to push meritless, misguided ethnic and religious agendas. The Nigerian Air Force wishes to implore everyone to respect the sensibilities of all those who have suffered most by this loss, those who really knew Tolulope – her family, her friends, and her Nigerian Air Force colleagues. It is of absolute importance that the memory of this Fallen Hero and our precious child is not tainted by the propagation of misplaced sentiments and wild shenanigans.