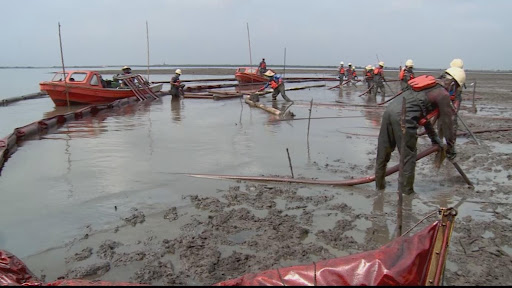 Nigeria’s Nembe community members took to the streets of Yenagoa, the capital of Bayelsa, and called out the government to take action against the gas and oil spill from a leaking wellhead. This spill has been affecting the local residents for over a month.

Natural gas and crude oil have been gushing into the neighbouring fishing settlements on the Santa Barbara river since November. The river convolutes through the Niger Delta before flowing into the Atlantic Ocean. The impact of gas and oil has been reported to carry out further due to the tides in the ocean.

The spill happened on the OML 29 Well 1 platform which was operated by Aiteo Eastern E & P, considered to be Nigeria’s largest domestic oil company. The reason for the spill is still under investigation. The incident however is considered to be the largest impacting gas and oil spill disaster in the history of the Nigerian petroleum industry.

While the region has been long-suffering with the basic amenities such as access to clean water, due to the environmental degradation that is dilapidating the livelihoods of the local people. It caused the life expectancy of the people to decrease by 10 years in the Delta region and its neighbouring areas. Moreover, the swamps and mangroves have become inhabitable to many species, degrading the ecosystem.

Amidst the protests outside of the press center of the Nigerian Union of Journalists in Yenagoa, Allen Jonah, the secretary of the Nembe Se Congress said on Monday that” We want the world to hear our cry that we are on the verge of extinction. The international community isn’t just playing to see what’s happening naturally settle down.

As per Nigeria’s Ministry of Environment, the country has documented a total of 5000 such incidents of oil spillage in a span of six years. However, the current incident continued for over 35 days and is claimed to be the worst.