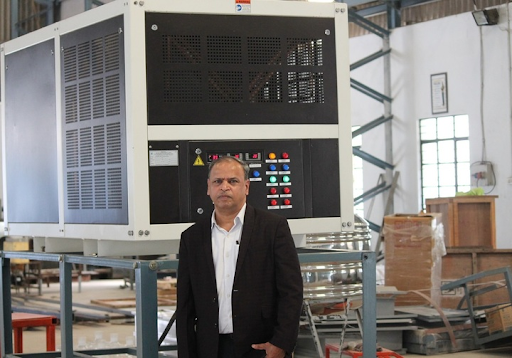 M. Ramkrishna, founder and managing director of Maithri Aquatech, seen here with an Atmospheric Water Generator machine at his factory in the southern Indian city of Hyderabad. (NNA)
Spread the news

An Indian startup that literally creates clean drinking water out of thin air has launched sales of its Atmospheric Water Generators (AWG) as the worsening water crisis in India has called for urgent sustainable solutions. Maithri Aquatech Pvt. Ltd., which is based in the southern Indian city of Hyderabad, is selling its low-cost ‘Meghdoot’ AWG machines at between $1,400 and $15,000 depending on size and capacity.

Ranging from a small unit about the size of a fridge to one as big as a truck, the potable water machines can be used by homes as well as business and industrial establishments. Created as an environmentally sustainable product, the machines operate on water-from-air technology, a solution that is growing in popularity around the world. Basically, water is harvested from the air, filtered and remineralized for drinking. Air is sucked in through filters, passes over condenser surfaces and the water formed is collected in a tank.

“The moisture from the atmosphere is an everlasting source of water. By extracting this water, we not only get pure drinking water but also save our groundwater. It requires no input water source and leaves no by-products. It’s a scalable, portable and cost-efficient solution,” M. Ramkrishna, founder and managing director of Maithri Aquatech, explained to NNA in an interview in Hyderabad on Jan. 13.

“We commercially launched our AWG machines in June 2018, but sales commenced only last year,” he said.

Ramkrishna added, “We have already deployed over 170 AWG machines in India and some overseas markets such as Malaysia, Papua New Guinea, Kenya and South Africa,”

After the three-year-old self-funded startup managed to sell its water solutions to sectors such as defense, airports, seaports, railways, education institutes and residential estates in India, it is now poised to expand business to Africa and Southeast Asia.

“In India, defense sector is one of our biggest buyers. The Indian Navy, for example, is using our AWG machines to generate drinkable water on large naval ships in the middle of the ocean,” Ramkrishna said.

Last month, the Indian Railways announced the setting up of an AWG kiosk at Secunderabad Railway Station in the southern Indian state of Telangana. It has a capacity to produce 1,000 liters of drinking water a day. “We are in talks with the railways to deploy 1,000 AWGs under the Opex (operating expenditure) model which means the company will set up and operate the AWG kiosks at various railway stations across India,” said Ramkrishna.

His company has already set up two factories with an annual capacity to produce 6,000 AWGs in Hyderabad to meet growing demand. Ramkrishna revealed he has received “many orders” from Africa and Southeast Asia.

“This month (January), we got some orders from Madagascar and Namibia. We are currently in the process to deploy our machines in Zambia. The project execution will start from March this year,” he said. The company has appointed Patrick Mwalua, a well-known wildlife activist recognized as the “Waterman of Tsavo” or “Kenyan Waterman” as its brand ambassador to promote AWGs especially in the wildlife sanctuaries facing acute water scarcity in Africa.

The machines can also operate in a moderately cool climate. They require a temperature of 28 C and a relative humidity of 80 percent to work at optimum efficiency. However, they are capable of working at temperatures as low as 15 C and at humidity levels as low as 25 percent, said Ramkrishna.

He was driven to develop practical solutions as the depletion of groundwater resources became a major concern amid irregular rainfall, rapid urbanization and industrialization not just in India but many places around the world.

According to the latest Composite Water Management Index report released by the government’s think tank Niti Aayog in 2019, India is home to 17 percent of the world’s population but has only 4 percent of the world’s freshwater resources. Five of the world’s 20 largest cities under water stress are in India. Delhi is second on the list, the report highlighted, adding that 8 million children below the age of 14 in urban India are at risk due to poor water supply.