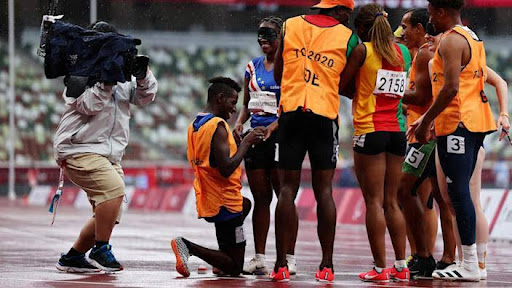 Sprinter Keula Nidreia Pereira Semedo won’t be leaving the Tokyo Paralympics with a medal, but she did get something that may be even better: an engagement ring.

After the 200-meter dash was over Vaz da Veiga can be seen briefly leaving the track and then returning with a few more runners and guides.

Then, he got down on one knee and proposed to Semedo, who appeared to be overjoyed by the proposal as Vaz da Veiga put a ring on her finger and then gave her a big hug. Shortly after the race and proposal, Semedo was completely overwhelmed.

“With the proposal, there’s just too many emotions going on right now,” Semedo said after the race, “I don’t have words to explain how I feel. These were my first Paralympic Games and with my age and speed, I was actually thinking about stopping afterwards. But now I have an additional motivation to carry on after the Games, always with him by my side.”

Vaz da Veiga later admitted he had been planning the big moment since she was selected for the Cape Verde team in July.