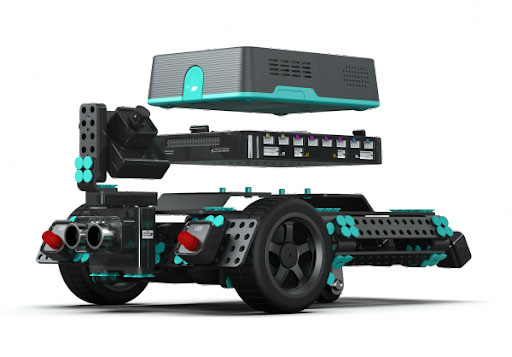 The unique, game-changing robotics toolset which combines all the power of the Raspberry Pi with the robust modularity of LEGO Technic is the long-awaited addition to the pi-top product range. It works when plugged into the pi-top, the world’s first Raspberry Pi 4 powered, go anywhere, do anything computer.

The pi-top has already become a popular portable computer amongst the making community and in schools worldwide since it was launched in 2019. Makers and pupils alike are able to create a wide variety of electronics projects using an ever-expanding range of kits and accessories. These include a ‘bento box’ of components including LEDs, buzzers, connectors and sensors, the pi-top FHD Touch Display and Bluetooth Keyboard. Coupled with the revolutionary new pi-top Robotics Kit, makers will now be able to go that one step further in their creations thanks to the device’s own amazing electronic components such as a wide-angle camera, servos and motors. The kit itself is made up of strong metallic build plates and brackets that snap together with rivets in a limitless number of configurations.

Whether designing an automated vehicle, creating a smart city, or making the coolest drone in the class, pi-top Robotics Kit will be able to help. Jesse Lozano, the co-founder of pi-top, said last night: “We’re really excited about the launch of the pi-top [4] Robotics Kit. It’s the culmination of years of work by everyone at pi-top and feels like the final piece of the puzzle. Our pi-top family is complete (for the moment)!

Another factor that makes the pi-top Robotics Kit stand out from other products on the market is that it offers users unique access to a powerful suite of open-source libraries. Makers will have the choice of working in any open-source software from Python to Robot Operating System (ROS) and even full deployment in a NET environment.

The pi-top Robotics Kit with Expansion Plate will be available to buy in the US for $199.90 from Amazon, b8ta stores, Newark, Digi-Key, Chicago Electronics and Arrow. Other international outlets include Elmwood Electronics in Canada, Farnell in the UK and The Brainary in Australia.

The 51st edition of CES – the world’s most influential tech event – will take place exclusively online from January 11th to 14th 2021. To find out more about the event, go to the website here (bit.ly/3ntPTlF).