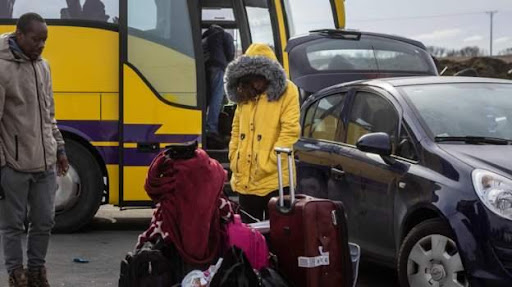 Andre Groenewald, South Africa’s ambassador to Ukraine said while leaving the capital of Ukraine, Kyiv, that he had no choice but to flee with his family. He added that armoured Russian convoys were headed to the city and he could hear explosions even while he was packing his belongings and readying the car to leave. However, when asked about the discrimination, he denounced the claims by saying that bombs do not discriminate.

He is travelling with his wife, three children and the remaining staff of the embassy towards Moldova, Romania, Hungary in a convoy of two vehicles. He mentioned that he along with the other ambassadors and his colleagues have been trying their best to secure a safe exit of all South Africans and foreign students from Ukraine.

However, some of the people faced racism while they were trying to flee, he said that he has both heard the accusations and seen the videos about racism, but in these tiring times, they are trying to offer as much help as they could to the students who are still stranded in the Ukrainian areas.

The ambassadors from South Africa in Hungary and Poland have also been helping people at the border to get through. But this is a terrifying situation and it has impacted all the foreigners.