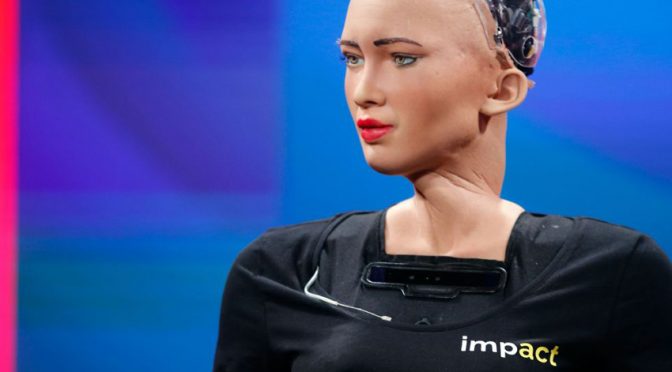 The Transform Africa Summit (https://transformafricasummit.org/) is the Smart Africa flagship event. Following four successful editions, the fifth Summit will take place in Kigali, Rwanda, from 14 – 17 May 2019.

Sophia, a social humanoid robot activated on February 14, 2016, will feature at the summit.

With an ability to display more than 50 facial expressions, the robot was developed by Hong Kong-based company Hanson Robotics. Sophia, modeled after actress Audrey Hepburn, is known for human-like appearance and behavior compared to previous robotic variants.

According to the manufacturer, David Hanson, Sophia uses artificial intelligence, visual data processing and facial recognition. Sophia also imitates human gestures and facial expressions and is able to answer certain questions and to make simple conversations on predefined topics (e.g. on the weather).

Sophia uses voice recognition (speech-to-text) technology from Alphabet Inc. (parent company of Google) and is designed to get smarter over time. Sophia’s intelligence software is designed by Hanson Robotics. The AI program analyses conversations and extracts data that allows it to improve responses in the future.

Hanson designed Sophia to be a suitable companion for the elderly at nursing homes, or to help crowds at large events or parks. He has said that he hopes that the robot can ultimately interact with other humans sufficiently to gain social skills

Sophia has been covered by media around the globe and has participated in many high-profile interviews. It is the first robot to receive citizenship of any country. Saudi Arabia bestowed the honor on the humanoid machine.

In November 2017, Sophia was named the United Nations Development Programme’s first ever Innovation Champion, and is the first non-human to be given any United Nations title.

In addition to the Smart Africa Leaders’ Summit, the Smart Africa Women’s Summit and interactive plenaries, the summit will feature subject specific streams tackling current ICT topics. Delegates will be able to attend insightful and engaging streams including Hubs as well as several customized sessions by our partners.

Interact with Sophia at the 5th Transform Africa Summit in Kigali, Rwanda from the 14th to the 17th of May 2019.

SMART Africa is a bold and innovative commitment from African Heads of State and Government to accelerate sustainable socioeconomic development on the continent, ushering Africa into a knowledge economy through affordable access to Broadband and usage of Information and Communications Technologies.

The Transform Africa Summit held in Kigali, Rwanda on 28th-31st October 2013 culminated in the adoption of the Smart Africa Manifesto document by seven (7) African Heads of States (Rwanda, Kenya, Uganda, South Sudan, Mali, Gabon, Burkina Faso) in which they committed to provide leadership in accelerating socio-economic development through ICT’s.

On 30th-31st January 2014, The SMART Africa Manifesto was endorsed by all Heads of State and Government of the African Union at the 22nd Ordinary Session of the Assembly of the African Union in Addis Ababa. This development places the Manifesto at the heart of the ICT agenda in Africa beyond just the 7 original signatories at the Summit to all the 53 African countries.

The Smart Africa Alliance has since grown to include 24 African countries that represent 600+ million people.