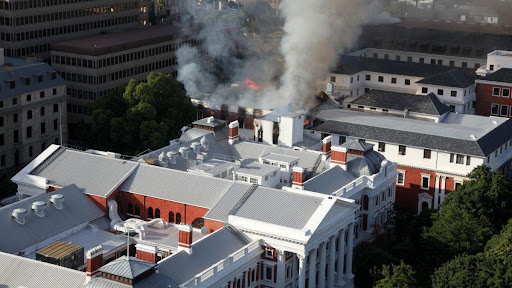 Security guards reported an act of major fire on the South Africa Parliament that caused extensive damage to the building. One person who is in his 50s was arrested in connection to the fire, according to the Public Works and Infrastructure Minister Patricia De Lille. He told the reporters that the case is being handed over to the Hawks, an elite police unit who is in charge of investigating any attack which happens on the public building or institutions.

The fire broke out on Sunday, early morning and according to the authorities at Parliament, the sprinkler system was tampered with resulting in its failure. This caused the fire to go out of proportion and by the afternoon 70 firefighters were trying to contain the outburst.

While the cause of the fire is still unknown and a standard fire drill was conducted before the Parliament was announced closed right before Christmas and New Year holidays, it was discovered yesterday that one of the valves was closed by someone who did not let the water come out from the automatic sprinklers.