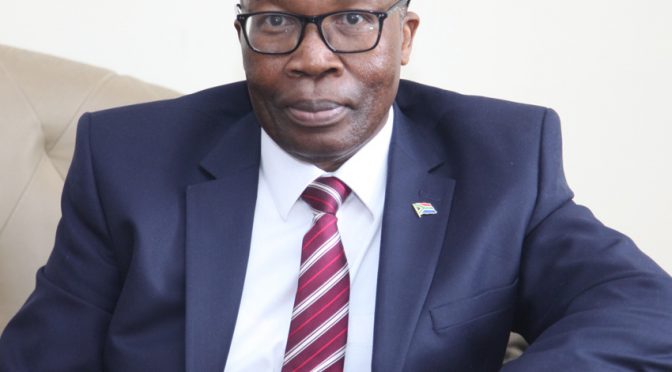 As the High Commissioner of South Africa to India, kindly tell us about your vision and plan of action for strengthening India-South Africa bilateral relations.

When the issue of the struggle against apartheid came in front of the international community, it was brought way back in 1946 by the Indian representative in the United Nations at that time, who raised that issue sharply.

From then on, India has been an active supporter of the struggle of the people of South Africa to end racial inequality.

Once apartheid was defeated, the new and harder struggle to create the South Africa that we want began – a South Africa that is equal, non-racial, non-sexist and prosperous. And who do we look up to? We look at our friends.

Therefore, the establishment of relations with India is part of recreating ourselves- as the new member of the world community that is free and where everybody is free.

Today, we see new forms of racial prejudice around the world. Racism and sexism are prevalent everywhere. In your opinion, how can we overcome this?

South Africa and India do not have to go very far. Their struggle against racism and discrimination was born in South Africa itself.

We received a young gentleman called Gandhi way back in 1894. He established the first organization to fight racial discrimination – the National Indian Congress. By the time he came back to India, he was no longer just Mr Gandhi, he was a Mahatma.

If you look at the vast sub-continent of India and the continent of Africa, it all came under the British Empire. Then came Gandhi with no military uniform or boots, but with a powerful idea of peace and non-violence. He stood for truth. The truth comes back to the basic that all human beings are created equal.

Kindly elaborate about the current economic scenario of South Africa.

The South Africa that we inherited from the devastation of apartheid was a skewed society; a society that has a very clear hierarchy of race and class – with the white on top and the black Africans at the bottom.

Not only was there political and economic deprivation but it was also psychological subjugation where people were made to believe that they are inferior to the whites. There was also a difference in education for white people and an inferior one for the black people.

It is this that we are tackling now to inculcate a new sense of self; to not hate other people or hate themselves. Because after being oppressed for a long time, you begin to doubt yourself and you start to hate yourself and that hatred is shown in the way you relate to your own family. You are submissive when you deal with the whites and when you deal with the fellow black people, you become violent.

The first message that Nelson Mandela gave when he came out of prison after more than 27 years was to throw your swords, guns, and all those weapons into the sea and now embark upon peace.

The message is, therefore, of peace. And when he said throw your weapons into the sea, he was not making an easy phrase. He didn’t say bury your weapons in the ground. He didn’t say bury your hatchet. You will remember where you buried it. So you will go back and pick it up again. But if you throw it into the sea, you will never find it again even when you get angry.

We want to create a new society based on love for each other and ourselves. Therefore, the economic struggle that we are embarking on is to reduce and eliminate inequality.

What are the government policies for the skill development of the youth?

Recently, we formed what is called the Mandela-Gandhi institute to accelerate the development of the youth, particularly in skills training. We are now talking about the fourth industrial revolution. The thing with social development is we do not always start from the beginning all over again.

The Mandela-Gandhi institute seeks to inculcate the youth with advanced technology. That’s the way to bridge the gap between the past inequalities. When other people are walking, you have to run because you have so much to catch up.

Right now, in terms of development in South Africa, we are talking about the land. Land ownership in South Africa is such a terrible dispute. More than 70 per cent of the land is owned by less than 6 per cent of the white population. Now we have begun the process of amending the Constitution. We have to make Land Redistribution much more equitable than it was before.

We are not going to just change the legislation but we are going to amend the Constitution so that it becomes irreversible.

What then are you going to do with that land? We will look towards India for learning what the nation has done with the land that they have. We see India producing quite a lot on various small pieces of land. Now we need that technology and that energy, creativity and skills transfer such that even the poorest of people can take a piece of land, say a far quarter of an acre, and do so much with it.

We want a transfer of that sort of skill and technology.

We are mobilizing students to say that your fight is not going to be a demand for land. Your fight is now going to be the usage of the land to produce more goods not just for the South African market but for a huge international market.

What is your message to the Government of India as the official representative of South Africa?

We should not take our freedom for granted. India is important for the whole of the third world in that we are members of BRICS – Brazil, Russia, India, China and South Africa.

We also belong to IBSA – India, Brazil and South Africa. All the three countries have just had elections so we have a full term of these countries working together to consolidate the freedom and the quest for equality, which is a long quest even for India.

The struggle for equality is a long quest. India has never oppressed any country. So it does not come with a baggage of having oppressed somebody else.

South Africa will be able to share that experience with India in this struggle for equality – equality in terms of race and gender, which is again a long struggle that we have to face.

You have to admit first that there is inequality between men and women and then do something about it. Do something not just in pronouncements but put something in your Constitution and your program. That struggle that India and South Africa have embarked upon should lend more solidarity to the country.