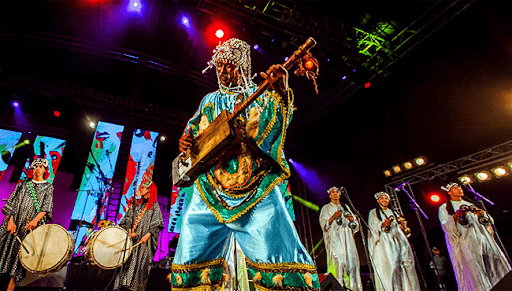 Since 2019, Gnaoua music has been a UNESCO World Heritage Site and portrays the story of Sub-Saharan African slaves. This ritual song of traditional music and dance just lets you move along with its rhythm. The artists wearing colorful costumes sing to the beat of “Lguembri” and “Qraqeb,” two instruments of Gnaoua’s music. No wonder famous performers like Led Zeppelin, Pat Metheny, Didier Lockwood, or Marcus Miller only came to Morocco to play with the greatest musicians.

Traditionally performed across Morocco, the Gnaoua music is spiritual music originating in the sub-Saharan region, although popular maâlems (master musicians) make the music very popular. The beats are repetitive and vibrant, led by a maâlem with a group of musicians and dancers.

Music is traditionally a part of a major ceremony named Lila (Arabic for ‘night’), termed the supernatural powers, in particular, to eliminate a member possessed by a djinn (genie). The entire night ceremony begins after the sacrifice of an animal, to ensure that the Spirits are there and then the maâlem and the clairvoyant lead the musician’s troops to play krakebs and burn incense to call on supernatural powers to take the followers in hand. Those involved in the purple enter a trance, which enables them to address their relationship with the local mystical powers known as the mluk, allowing supporters to return to a normal state.

Seven is a typical number of lilas with the mystical power of seven various colours. In the lilac, the mluk is awakened by seven distinct incense, seven various dress colors, equal rhythms.

Krakebes (sometimes called castanets) and a gimbri are crucial to the Gnaoua sound (a three-stringed guitar carved from a log with the backside covered in camel skin). The maâlem (master musician) repeats each line or phrase repeated numerous times; the sound of the instruments intensifies as the dancers move in the distinctive rhythms and often enter the trance-like condition, clad in beautiful cowry shells and caps.

Today the music is considerably more popular with evening concerts in Marrakech on the Jemaa el Fna square and the melodies in Essaouira’s medina. Gnaoua Music Festival performs on the main stage in the coastal town every year. It typically blends with world jazz and world music and music sensations including  Randy Weston, Omar Sosa and Tony Allen, and frequently throughout the small hours of the night.