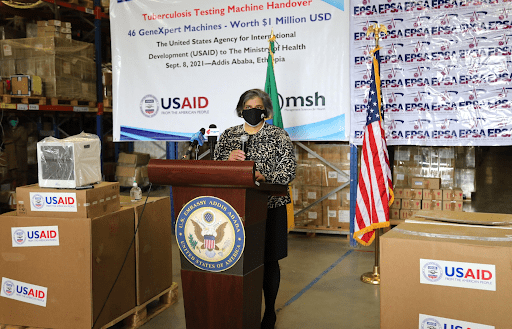 Today, the United States through the United States Agency for International Development (USAID), donated 46 cutting-edge tuberculosis (TB) testing machines – worth $1 million – to the people of Ethiopia. These new machines will reduce the time it takes to diagnose TB across the country from two days to two hours. These new machines are called GeneXpert Tuberculosis Diagnostic Machines and were handed over by U.S. Ambassador to Ethiopia, Geeta Pasi, to the honorable Minister of Health, Dr. Lia Tadesse, at the Ethiopian Pharmaceuticals Supply Agency Compound.

“As long standing partners of the Ethiopian people, the American people are proud of this enormous step toward eliminating tuberculosis in Ethiopia once and for all,” said Ambassador Pasi.

TB currently kills 24,000 people per year in Ethiopia, which amounts to nearly 3 deaths every hour. But TB is both a treatable and preventable illness, and USAID is working in partnership with the Ethiopian people and the Federal Ministry of Health to eliminate this infectious scourge as fast as possible.

Today’s forty-six (46) machines are part of USAID’s commitment to supporting the people of Ethiopia to find and successfully treat ninety percent of TB cases nationwide—the first step to eliminating the disease altogether. Today, epidemiologists estimate that there are roughly 160,000 cases of TB across Ethiopia. In addition to reducing the time it takes to diagnose TB from two days to two hours, the 46 new machines are also more accurate than routine, microscope-based methods.

In September 2019, USAID signed a statement of partnership agreement with the Federal Ministry of Health to accelerate our joint effort to end TB. This event showcases that partnership.

Today’s donation of cutting-edge tuberculosis (TB) testing machines is just a part of the United States’ investment of over $4.2 billion in development aid in the last 5 years alone. Together, the United States is helping millions of Ethiopians lift themselves out of poverty and is supporting their health and wellness for a brighter future.