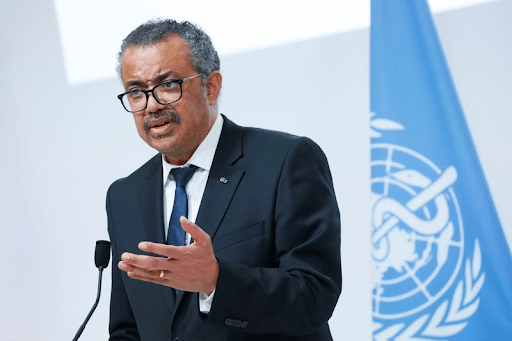 FILE PHOTO: WHO Director-General Tedros Adhanom Ghebreyesus speaks during a news conference after a ceremony for the opening of the WHO Academy, in Lyon, France, September 27, 2021. REUTERS/Denis Balibouse
Spread the news

More than 80 aid workers including some employed by the World Health Organization (WHO) were involved in sexual abuse and exploitation during an Ebola crisis in the Democratic Republic of Congo, an independent commission said on Tuesday.

Remarks by WHO Regional Director for Africa, Dr Matshidiso Moeti

The commission has identified dozens of potential victims of sexual exploitation and abuse, and 21 alleged perpetrators, who were employed by WHO at the time of the events

As you know, in October last year, I appointed an Independent Commission to investigate allegations of sexual exploitation and abuse during the response to the tenth Ebola Virus Disease epidemic in North Kivu and Ituri, in the Democratic Republic of the Congo.

The commission was co-chaired by Her Excellency Aïchatou Mindaoudou, the former Minister of Foreign Affairs and Social Development of Niger, and Madame Julienne Lusenge, an internationally recognized human rights activist and advocate for survivors of sexual violence in conflict, from DRC.

Today, the commission published its report. It makes for harrowing reading. I will make my comments shortly, but first I would like to welcome the co-chairs to present their findings.

I would also like to recognize the presence of the other members of the convention, Madame Dikéré Marie Christine Bocoum, Madame Carole Doucet, and Former Minister Malick Coulibaly.

Before I give the floor to the Commission to present, I would like to invite my colleague and sister, Dr Tshidi Moeti, the WHO Regional Director for Africa, to make her remarks. Tshidi, you have the floor.

Thank you, Tshidi. Now I would like to invite Madame Julienne Lusenge, one of the co-chairs of the Commission, to make her remarks. Madame Lusenge, you have the floor.

Merci beaucoup, Madame Lusenge. I would now like to invite Mr Malick Coulibaly, former Minister of Justice and former President of the National Human Rights Commission of Mali. Mr Coulibaly, you have the floor.

Thank you Madame Aïchatou, and thank you all once again for the commission’s work, and for your briefing today.

The first thing I want to say is to the victims and survivors of the sexual exploitation and abuse described in the commission’s report.

I’m sorry. I’m sorry for what was done to you by people who were employed by WHO to serve and protect you.

I’m sorry for the ongoing suffering that these events must cause.

I’m sorry that you have had to relive them in talking to the commission about your experiences.

Thank you for your courage in doing so.

What happened to you should never happen to anyone. It is inexcusable.

It is my top priority to ensure that the perpetrators are not excused, but are held to account.

As the Director-General, I take ultimate responsibility for the behaviour of the people we employ, and for any failings in our systems that allowed this behaviour.

And I will take personal responsibility for making whatever changes we need to make to prevent this happening in future.

The commission has done outstanding work to get the voices of victims and survivors heard. But the investigation is not complete, and will require further work.

But we must act immediately, and we will, in three areas:

First, support, protection and justice for the victims and survivors;

And third, wholesale reform of our structures and culture.

First, support, protection and justice for victims and survivors.

As you have heard, the commission has identified dozens of potential victims of sexual exploitation and abuse, and 21 alleged perpetrators, who were employed by WHO at the time of the events.

The victims were only able to provide first names for several other alleged perpetrators, whom we are yet to fully identify. For those cases, WHO is engaging an external investigative service to assess what additional steps are required.

Based on the information we have, the Organization will ban the identified perpetrators from future employment with WHO, and we will notify the broader UN system.

We are terminating the contracts of four people identified as perpetrators who were still employed by the Organization when we were made aware of the allegations against them.

WHO will also refer the allegations of rape to national authorities in DRC for investigation, and in the country of nationality of the alleged perpetrators, where applicable.

We have requested confirmation from the Independent Commission that the victims of rape have provided consent for WHO to refer their cases to the relevant national authorities.

Providing services and support to victims and survivors is our central concern.

WHO is not yet aware of the identity of the victims and survivors.

As we receive more information from the Commission on their identity and location, we will ensure that they all have access to the services they need, including medical and psychosocial support, and assistance for education for their children. These services are available in DRC from our partners across the UN system.

We are committed to a survivor- and victim-centred approach that prioritises their needs, preferences and participation, as we expand services in DRC and around the world.

Although the Commission’s work has ended, we have provided continued access to anonymous reporting mechanisms for incidents of sexual exploitation and abuse. Anyone who calls to complain will be referred to services.

The commission has identified negligence on the part of certain individuals that may amount to professional misconduct in the management of some of the incidents reported.

In my view, the failure of WHO employees to respond adequately to reports of sexual exploitation and abuse is as bad as the events themselves.

I deeply regret that the suffering of victims may have been exacerbated by the apparent failings in the way the Organization handled reports.

The Commission has recommended an investigation to identify individual responsibilities for the failure to activate investigation procedures, and we are taking immediate steps to initiate that investigation, using an external investigative service.

While that investigation proceeds, the Organization has placed two senior staff on administrative leave, and we’re taking steps to ensure that others who may be implicated are temporarily relieved of any decision-making role in respect of allegations of sexual exploitation and abuse.

It is important to be clear that these actions do not in any way prejudge the outcome of the investigation and are not a disciplinary measure or attribution of guilt.

The Organization will initiate appropriate disciplinary action in respect of findings of misconduct from the investigation.

We have also asked the Independent Expert Oversight Advisory Committee to engage an external body to conduct an audit into cases processed by WHO’s Internal Oversight Services, to establish whether any further cases of incidents of possible sexual exploitation and abuse were subject to procedural failings.

Third, we will undertake wholesale reform of policies and processes to address sexual exploitation and abuse.

But we must go further, to identify and address any shortcomings in our culture or leadership that fail to adequately protect the people we serve, or that create opportunities for abusers to exploit.

The commission has identified the need for fundamental changes in our structures and institutional capacity for preventing, detecting and responding to sexual exploitation and abuse in the communities we serve.

We will engage external experts and services to make sure this happens.

We need to make sure that victims and survivors of sexual exploitation and abuse have safe and easily accessible reporting mechanisms, anywhere in the world.

As you know, the Ebola response in North Kivu and Ituri was a large and complex operation in a highly insecure region, requiring large-scale recruitment of local and international personnel.

But none of that is an excuse for sexual exploitation and abuse.

We accept that we should have taken stronger measures to screen candidates and ensure more effective human resources processes.

Already we have taken several steps to improve our HR practices in recruitment, onboarding, induction and training. We will also take steps to integrate standards of behaviour relating to sexual exploitation and abuse in performance management, starting with leaders and managers.

We have also initiated special briefings for managers, especially at the country level.

Going forward, WHO country representatives, incident managers, health cluster coordinators and directors will be required to participate in additional training to ensure that they are able to create an environment for the prevention of sexual exploitation, abuse and harassment, and to take managerial action without delay in case of any suspected incident.

I will ensure we provide sufficient resources and staff for the work ahead of us.

The commission has made 7 recommendations, with 20 specific actions.

Many of these actions are already underway, and we will expand our work to include other priorities recommended by the commission.

We plan to provide a comprehensive management action plan with our Member States within the next 10 days, and transparency will be at the centre.

To further strengthen accountability, we have asked the Independent Oversight and Advisory Committee of the WHO Health Emergencies Programme to monitor and report transparently on our progress.

Once again, I would like to thank the Commission for its work, as well as the journalists who first reported the allegations that led to the initiation of the Independent Commission’s investigation and report. Thank you.

We value the role of the media in covering and uncovering these issues, and in holding WHO accountable.

I struggled to find the words to describe my feelings when I first read the Commission’s report.

The conduct it describes is a sickening betrayal of the people we serve. But it’s also a betrayal of our colleagues who put themselves in harm’s way to serve others, including those who paid the ultimate price, killed by armed groups in North Kivu, while working to protect the health of vulnerable communities from Ebola.

This is a dark day for WHO. But by shining a light on the failures of individuals and the Organization, we hope that the victims feel that their voices have been heard and acted on;

We want the perpetrators to know there will be severe consequences for their actions;

We expect and demand that all our staff at all levels understand the heightened responsibility that comes with working for WHO;

We will hold all leaders accountable for inaction in any suspected incident of sexual exploitation and abuse.

We are acutely conscious that we need to rebuild trust with the people we serve, with our Member States, with our partners and with our workforce. Only then can we succeed in our mission to promote health, keep the world safe and serve the vulnerable.